De Wilde Eend (Originally 'Vildanden', in English 'The Wild Duck') was a theatre play that ran at Het Compagnietheater in Amsterdam from February 16 to March 28, 2008. The piece, originally written by Henrik Ibsen in 1884, was directed by Maaike van Langen for De Theatercompagnie.

As with the previous posters we designed for De Theatercompagnie (see for example DTC / Driekoningenavond and DTC / De Vrouw van Vroeger), the whole concept behind the printed matter revolved around the idea of taking a textual fragment from the play, and spreading this fragment over
two posters; two posters reacting to each other, almost like two actors engaged in a dialogue.

After reading the script of the play, we became interested in the tension between two of the main characters of the play, Gregers and Reling. They are both aware of certain truths, but they differ completely on what to do with these truths. Gregers is the idealist, trying to separate lies from ideals, while Relling is more cynical: for him, ideals and lies are the exactly same. This is expressed most clearly when he says that "idealen en leugens met elkaar te maken hebben zoals tuberculose en de vliegende tering" ("ideals and lies relate to each other like tuberculosis and galloping consumption ").

For the set of posters, we wanted to focus on these two words, 'ideals' and 'lies'. We designed two posters (an A2-sized poster and an A0 version) with a minimal colour variation: one poster underlining the word 'ideals', the other poster emphasizing the word 'lies'. See: 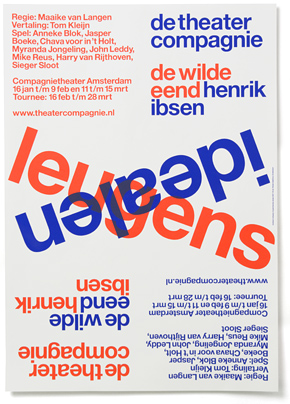 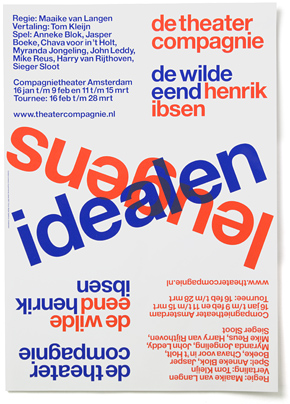 We designed these posters in such a way that they both could be hung upside down as well, further confusing the relationship between 'lies' and 'ideals', while we used the colours red and blue to create the maximum contrast between the two words.

As with the previous plays (Gilgamesj, The Pillowman etc.), we were also asked to come up with a simple brochure. Basically, we designed a double-sided A2 sheet, folded to an A5-sized booklet. Shown below are the front (left) and back (right) of the A5-sized booklet: 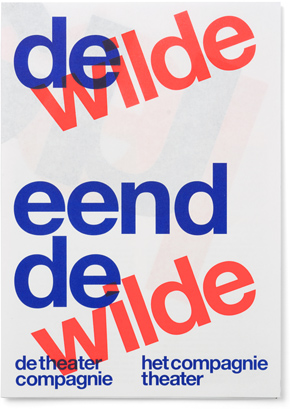 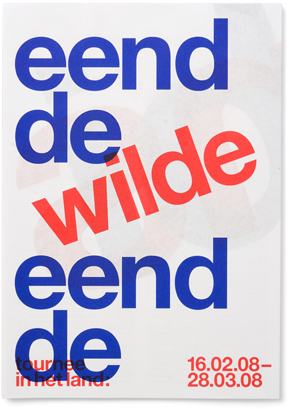 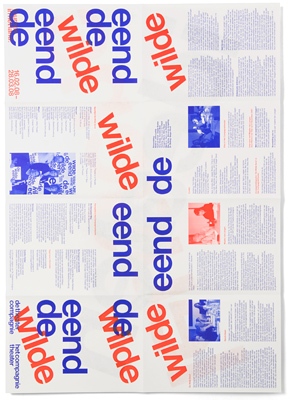 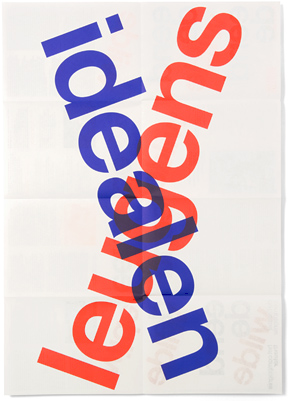 We also designed the usual postcard, and a couple of promotional photographs. Truth is, these items look radically different from the posters and the brochure described above. We had to design the postcard and the promotional pictures several months before we designed the actual posters; and at that time, the script of the play was not yet made available to us. So our only clue was the title, 'The Wild Duck'. We came up with a quick formal solution, referring to the idea of wild ducks by showing the title as a flock of words flying through air.
The problem was, when we finally read the actual script (and this was after we designed the postcard), we realized that the 'wild duck' in the play is in fact a crippled duck, caught in an attic, living in a make-believe forest. That is when we decided to let go of the idea of a flock of words, and come up with an entirely new concept (which became the 'ideals/lies' concept). Of course, by that time, the postcard and the promotional photographs were already distributed.

Shown below the postcard, front- and back. It's an A5 card, perforated in the middle to form two
A6 cards: 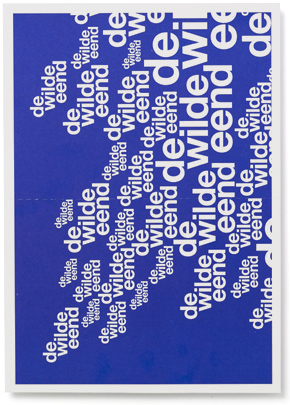 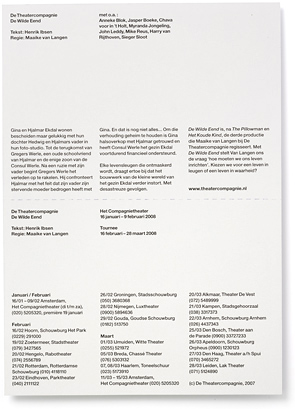 Around the same time as we were designing these postcards, we also created some promotional pictures: photographs to be sent to newspapers, to be used in brochures, etc. We made these images in close cooperation with photographer Johannes Schwartz.
Unfortunately, because of technical reasons, we can't show these photos right now; we'll upload them soon. In the meantime, more about the overall concept behind these photographs can be read here (go to DTC / Driekoningenavond and scroll down).

As was the case with all of the other plays (Gilgamesj, The Pillowman, Driekoningenavond, etc.), for De Wilde Eend we also had to design lots of small last-moment advertisements (mostly for magazines, newspapers and websites).
We won't show all these tiny adverts here, but some examples can be seen at DTC / Banners. On that page, we show a couple of banners that we designed for use on various theatre-themed websites (such as www.moose.nl).