2K by Gingham is a Japanese/American t-shirt label we've been collaborating with for quite a long time now. Its director, Yoshi Kawasaki, contacted us in 1999, and we have been designing t-shirt prints for him ever since. In short, every year we design a small collection of shirts, which is then released through 2K, and sold through various stores and websites.

In the beginning of 2000, we were very interested in the whole concept of 'self-referentiality': graphic design referring to itself, or to its own context. This interest shows in the early t-shirt prints we designed for 2K/Gingham: the John & Paul & Ringo & George shirt (2001) was referring to the idea of the band shirt, while the Anti shirt (2000) was referring to the idea of the slogan shirt.
However, in our more recent shirt designs, we try to take a lighter, more playful approach. We decided to focus more on the subject of language: short poems, found text, slogans, wordplay, quick thoughts, silly jokes.
We really like the definition that Augusto de Campos once gave of Concrete Poetry: "The tension of thing-words in space/time". What we try to explore with our shirt designs is very similar to that: the shirt as a 'word-thing' existing in 'time/space'.

Here's a selection of shirts we designed in 2005 (and were released in 2006). As a matter of fact, all three shirts deal with language in a very specific way.

The 'Beauty of Speed' shirt (shown below) was an adaption of a poster we designed earlier, for the German magazine AM (Akademische Mitteilungen). It shows a phrase from the Communist manifesto (by Engels/Marx) combined with a phrase from the Futurist manifesto (by Marinetti), an attempt to piece together the ultimate proto-modernist one-sentence manifesto. (The full story can be read at 2005's The Beauty of Speed). For the shirt, we decided to place the text in a rectangle, to subtly suggest the outline of a poster. The shirt was released in two different colour combinations: black and red on a white shirt, and white and red on a black shirt. 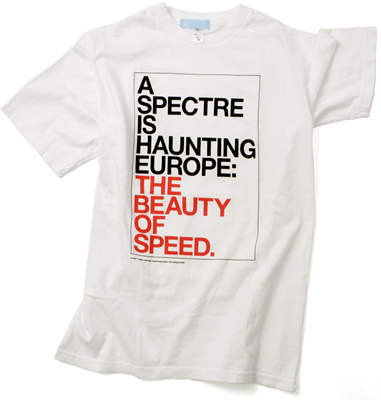 The 'New Wave / Neue Welle / Nouvelle Vague' shirt was also related to language. We wanted to show the little shifts of meaning that occur when the same sentence is translated in three different languages. 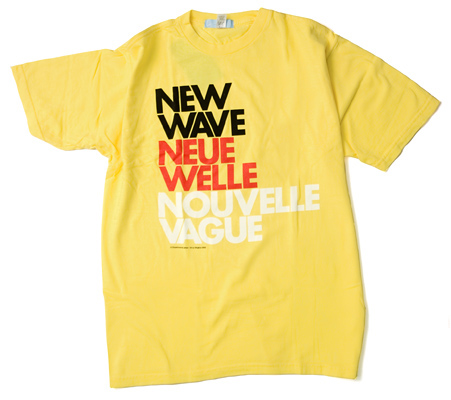 While the 'New Wave / Neue Welle / Nouvelle Vague' shirt was about the differences between languages, the 'Cu Vi Estas Esperantisto?' ('Are You an Esperantist?') shirt is in fact about the famous universal language, Esperanto. This shirt is referring to a flag as well: both colour combinations of the shirt (white/yellow on a green shirt, and yellow/green on a white shirt), as well as the star used in the design, refer to the flag of Esperanto. 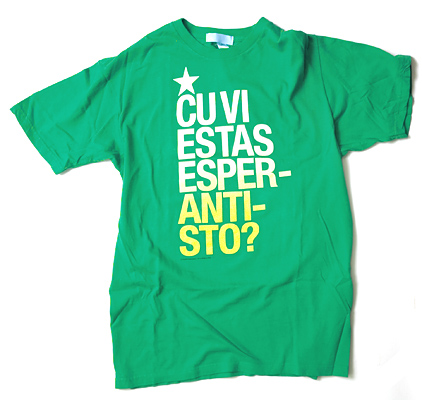 These shirts used to be available through 2K/Gingham. However, when in 2008 Yoshi Kawasaki decided to leave the company (following a change in management), we decided to leave with him, and withdrew our shirts from 2K. In other words, these shirts are currently unavailable. However, if everything goes according to plan, a selection of these shirts will be reprinted and released through Yoshi Kawasaki's new label, Publik / Five Leaves Inc., in 2009. So stay tuned.

next: Group portrait with C.