2K by Gingham is a Japanese/American t-shirt label we've been collaborating with for quite a long time now. Its director, Yoshi Kawasaki, contacted us in 1999, and we have been designing t-shirt prints for him ever since. In short, every year we design a small collection of shirts, which is then released through 2K, and sold through various stores and websites.

Designed in 2004, released in 2005 (as always, there's a year production-time between the moment these shirts are designed and the moment they hit the stores), this was a simple and compact line of shirts. In retrospect, not our favourite series of shirts, but we'll include it for the sake of completeness.
The theme of this particular series revolved around the idea of chess, and for this we had a couple of reasons. First of all, with the 'Anti' and 'Thesis Antithesis Synthesis' shirts that we designed in 2000, we tried to refer to the idea of dialectics. With the 'Chess Series' we wanted to continue this idea, by referring to the game of chess as the ultimate confrontation between two polar opposites, black and white.
Another concept we are trying to explore was the idea of self-referentiality: t-shirt prints about t-shirt prints. Just as the 'Anti' shirt (2000) was an attempt to make a typical slogan shirt, and the 'John & Paul & Ringo & George' shirt (2001) an attempt to make a typical band shirt, we kind of hoped the chess shirts would function as typical sport shirts.

Photographed here is the first shirt of the line, basically a very plain introduction to the series as a whole. Two pawns about to strike each other, captured in a rather crude logo. Printed in two colour combinations: white and black on a grey shirt, and white and yellow on a black shirt (shown below): 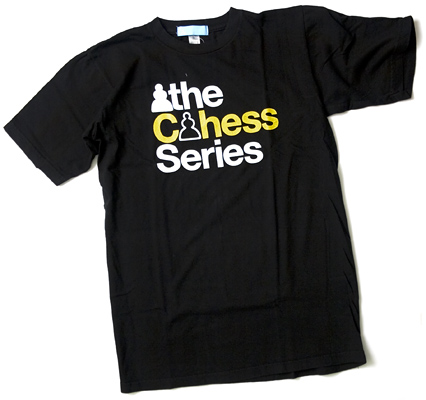 Another shirt that we designed as a part of the Chess Series is the shirt below, displaying what might seem like a two-tone pattern but what actually is an actual-size chess board. In our original design, the shirt featured two badges, showing the two pawns of the logo. But for some reason, we couldn't convince 2K/Gingham to bring out the shirt like this, which is why the shirts were being sold without badges. It's a shame, really. Photographed here is the shirt with badges, as we intended it. Printed in two versions: white on a black shirt (shown below), and white on a grey shirt. 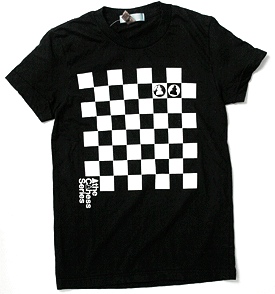 Shown below the 'Deep Blue' shirt. We liked the impact of these two words: 'Deep Blue'. It conjures up fantastic images: Kasparov's controversial match against the famous IBM chess computer, the sci-fi iconography of chess computers in general, the whole idea of 'man against machine'. These are also quite emotional words, both 'deep' and 'blue' relating to feelings of sadness. Printed in two versions: dark blue on a white shirt, and white on a dark blue shirt: 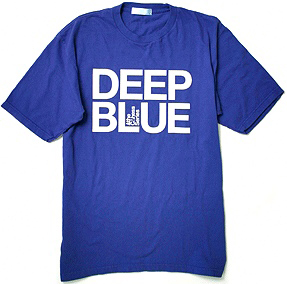 Thinking about sports in general, we wanted to do something on the subject of the 'duel': the aesthetic concept of two names pitched against each other, the iconic value of the word 'versus', and the rhythm in slogans such as 'Rumble in the Jungle' and 'Thrilla in Manilla'. For our Chess Series, we wanted to design a shirt that would refer to exactly this kind of 'duelism'.
We took a very iconic chess match (in this particular case the Reykjavik 1972 world championship between Robert Fischer and Boris Spassky) and turned it in a very basic 'duel' shirt. On the front, the two names are set against each other, while on the back of the shirt, the whole sixth game of the match is written-out. Printed in one colour variation: gold on a black shirt (shown here): 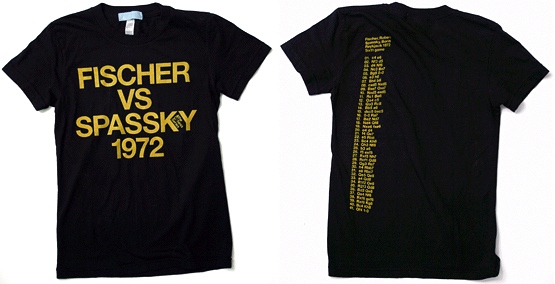 These shirts used to be available through 2K/Gingham. However, when in 2008 Yoshi Kawasaki decided to leave the company (following a change in management), we decided to leave with him, and withdrew our shirts from 2K. In other words, these shirts are currently unavailable. However, if everything goes according to plan, a selection of these shirts will be reprinted and released through Yoshi Kawasaki's new label, Publik / Five Leaves Inc., in 2009. So stay tuned.